Hello,
I was looking on the Internet and came across your site dedicated to Aaron Burr.  I am a collector of miniature portraits and thought you might possibly like to see the attached two miniature portraits on ivory I have which I believe are of Aaron Burr and his daughter Theodosia.
Comparisons of the portraits with other identified images are included within the collection, which is available to view on the Internet. You can find the portraits either by starting at the home page - Artists and Ancestors - A Miniature Portrait Collection  or going direct to the section entitled American 1 at American Miniature Portraits - 1  where the two portraits are included with a number of other American miniature portraits.
I am very happy to try and answer any questions you may have.
Regards
Don

It is hard to select particular highlights, but the collection does include these portraits.

1 Aaron Burr, Vice-President of the United States, who killed Alexander Hamilton in a duel. Early 19C painting by unknown artist, after the Vanderlyn portrait, (included in American 1 miniatures). 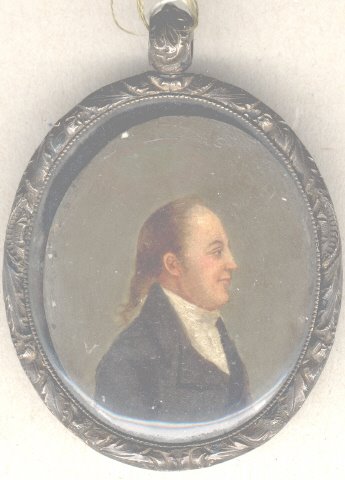 2 Theodosia Burr Alston, daughter of Aaron Burr, attributed to John Wesley Jarvis. She was tragically lost at sea on a coastal voyage to New York, (included in American 1 miniatures). 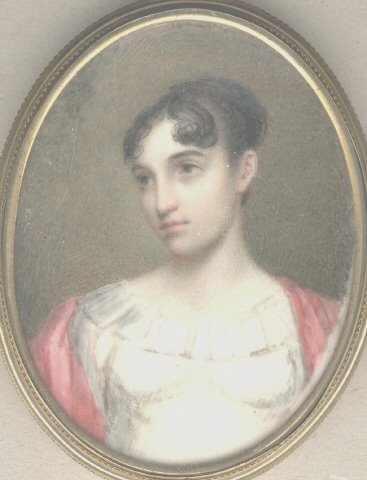 3 Napoleon, attributed to Jean Baptiste Duchesne. This portrait is engraved with the inscription "Given by the Emperor Napoleon to Marshal Ney who gave it to Lady Elizabeth Monck". Research has identified Lady Monck and how she could have come in contact with Marshal Ney, (included in European 1 miniatures.)

4 Auguste Rodin leaning on his most famous sculpture, by F L Nicolet, (included in European 1 miniatures).

5 Portrait of a man by Charles Bourgeois. There are several similar portraits by him in the Louvre Museum, (included in European 1 miniatures).

6 William Pitt the Younger, Prime Minister of Great Britain, attributed to John Donaldson. This portrait is engraved on the rear with the inscription "Rt Hon'ble William Pitt". It is believed to have been painted shortly after he entered Parliament, (included in British 1 miniatures.) 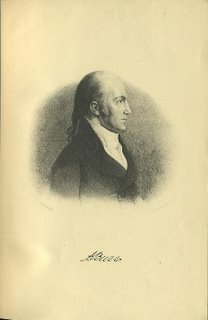 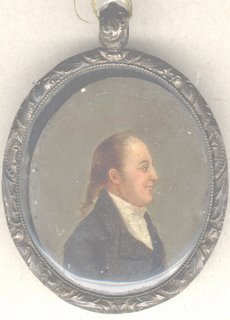 Although this miniature portrait is unsigned and lacks the artistic skill of an expert artist, being painted in something of a primitive style, it is an important item. The collector has not seen another American sitter portrayed in this pose in an ivory miniature. Being a fairly wooden pose, is a sign it was not painted from life.

The miniature was purchased as an unidentified sitter, but from some research, it is now believed to be a portrait of Aaron Burr (1756-1836), and copied either from the original Vanderlyn painting, or perhaps more likely from the Parker profile engraving. It is painted on a thick piece of ivory, which is an indication of some age. The painter did not get the eyes quite right, but was more successful with the chin and the clothing.

The original engraving itself was copied by G Parker in 1826 from the 1802 John Vanderlyn portrait of Burr, which can be seen at Aaron Burr -- Encyclopædia Britannica

Various engravings derived from the painting seem to exist. One version of the engraving can be see on this page. Another version can be seen at Aaron Burr

Thus even though the eyes are not well painted, a comparison of the detail of this miniature, shows fairly conclusively that the engraving was the source for the miniature. This type of heavily chased frame was not often used after about 1830 and hence by the style of frame, it seems that this portrait would have been painted before, or very shortly after, Aaron Burr's death in 1836.

Other miniature portraits copied from the engraving do exist and another version, where Burr is wearing a blue coat, can be seen at The Henry Luce III Center Item Detail This latter one was probably painted much later, as the style of frame is closer to those used in 1900, as are the colors used to paint the portrait.

For more about Aaron Burr, including current updates, see The Aaron Burr Association 745 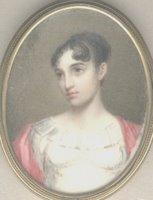 This miniature portrait is unsigned but has been attributed to John Wesley Jarvis (1780-1840). The case is not original. The sitter has been identified as Theodosia Burr Alston (1783-1812), who was the daughter of Aaron Burr, the Vice President who was highly regarded in his day, but today is unfortunately most often remembered for killing Alexander Hamilton in a duel in 1804.

The portrait was acquired as an unknown lady, but some time later, a chance review of the CAA 1984 catalogue located the attached identical image on page 154. Although the catalogue lists the miniature as unattributed, more recent research has amended this. (Thank you to CAA for this later information, CAA reference - Theodosia Burr (Mrs. Joseph Alston, 1783-1812), attributed to John Wesley Jarvis, Watercolor on ivory, Gibbes Museum of Art/Carolina Art Assocation, for further information - The Gibbes Museum of Art, Charleston, South Carolina) .

Theodosia was lost at sea on a coastal voyage to New York in 1812. For more about Theodosia go to THE FATE OF THEODOSIA BURR: The Outer Banks, NC ~ Packet by Eric ... 866